Survival and disease recurrence are two critical measures of prognosis prognosis Relates to the outcome, course of a disease, or chance of cure. (how a patient will do after a cancer cancer A term used to describe diseases in which abnormal cells continually divide without normal regulation. Cancerous cells may invade surrounding tissues and may spread to other regions of the body via blood and the lymphatic system. diagnosis). Recurrence refers to whether the cancer ever comes back (see the Recurrence page to learn more) and “MCC specific survival” refers to the likelihood of not dying from the cancer. The figures below show how MCC stage affects survival after an MCC diagnosis.

In general, patients with local local Affecting only the site of origin, without evidence of spreading. Compare to systemic. or nodal disease have improved survival compared to patients with distant metastatic metastatic Having to do with the spread of cancer from a primary site of origin to distant areas beyond the draining lymph nodes. disease. Most deaths from MCC occur in the first three years after diagnosis.

“Kaplan-Meier” curves are a standard way to show both recurrence-free survival and MCC-specific survival over time starting from diagnosis. In the Kaplan-Meier curves shown below, each tick mark indicates a patient who was “censored” at that point and is no longer included in the data to the right of that point. Reasons for “censoring” include no follow up data available beyond that date, or death from a non-MCC cause. These curves were generated using the AJCC 8th Edition staging system.

MCC-Specific Survival for 463 patients based on their Pathological (P) Stage Stage Physicians determine the stage of cancer by performing physical exams and tests. Stages describe the extent of cancer within the body, especially whether the disease has spread (metastasized) from the primary site to other parts of the body. . These data are from the patients with P-1 Stage (n=153), Stage P-II (n=44), Stage P-IIIA (n=166), Stage P-IIIB (n=58), and Stage P-IV (n=42) enrolled in the Seattle based MCC cohort through Jan. 2018. Staging was per AJCC 8th Edition system.
*Path. Stage IIB was combined with Path. Stage IIA due to a small sample size. 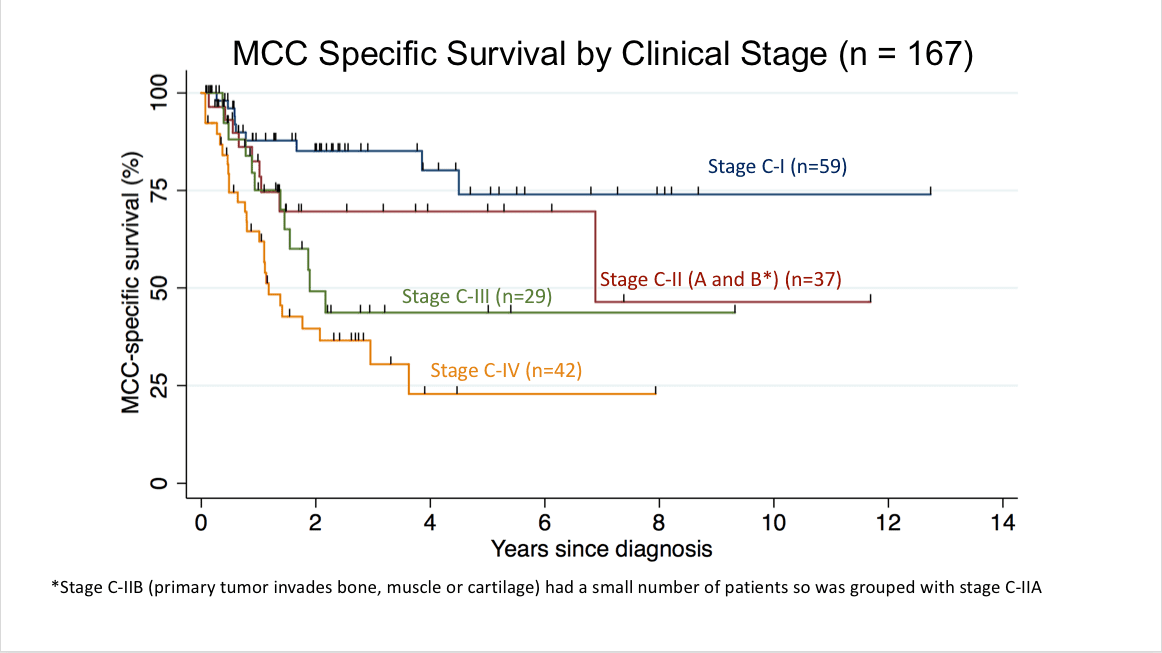 MCC-specific survival survival for 167 patients based on their Clinical(C) Stage. These data are from the patients with Stage C-1 (n=59), Stage C-II (n=37), Stage C-III (n=29), and Stage C-IV (n=42) enrolled in the Seattle based MCC cohort through Jan. 2018. Staging was per AJCC 8th Edition system.
*Clinical Stage IIB was combined with Clinical Stage IIA due to a small sample size.

How physicians determine your prognosis

At the time of diagnosis, your medical team will ‘stage’ your cancer. The stage is based on many factors including the size of the tumor, the results of a sentinel lymph node biopsy and scans, etc. Please see the Staging page to learn more. The stage of the cancer can predict the chances of having a recurrence of MCC.

Using information about stage as well as how long it has been since diagnosis, these graphs can help determine how much ‘risk’ remains and thus how frequent physician visits should be.

What are my chances of beating Merkel cell carcinoma?

Your chance of beating MCC depends on how advanced the disease was when it was diagnosed, what treatment you receive and if your immune system is functioning properly. The “stage” of your cancer refers to whether the cancer is only in the skin, has spread to the lymph nodes or has spread elsewhere in the body. In general, about 1/3 of all MCC patients will succumb to this disease.

How can I increase my chances of survival?

You can increase your chance of survival by working with a team of doctors that is familiar with the unique management of MCC. In most cases, getting a baseline scan and a sentinel lymph node biopsy is the best way to determine how advanced your cancer is. MCC is not the same as small cell lung cancer, and thus should not typically be treated with chemotherapy alone. Similarly, MCC is not the same as melanoma, and thus extra consideration should be taken before treating with surgery alone. Another important aspect of your treatment is to continue to eat a healthy diet and get regular exercise to help keep your immune system and overall health strong.

People with severe defects in “T lymphocytes” (key cells of the immune system) have a 10-30 times greater chance of developing MCC and twice the chance of losing the battle with MCC compared to people with a normal immune system. The conditions that cause such severe T lymphocyte defects include HIV (AIDS), taking immune suppressive drugs after solid organ transplantation, and certain immune cancers such as chronic lymphocytic leukemia. In contrast, suffering from more “colds” than average will not importantly affect your ability to fight MCC.

The first consensus Merkel cell carcinoma (MCC) staging system was published in 2010. This 2016 study updates several aspects of how MCC is currently staged. Methods: A total of 9387 MCC cases from the National Cancer Data Base Participant User File with follow-up and staging data (1998–2012) were...